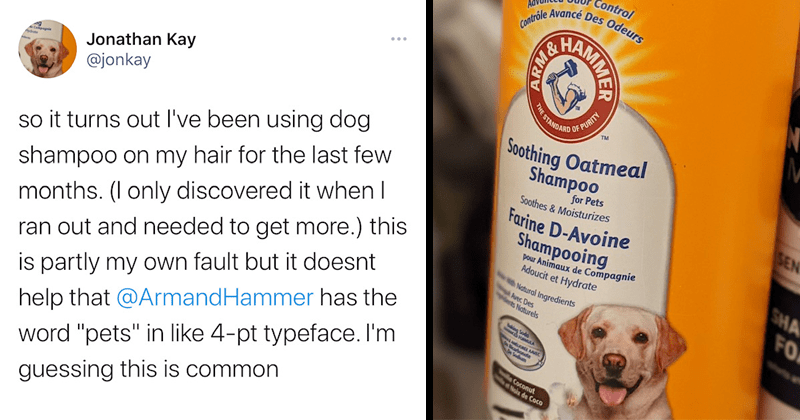 Nobody’s perfect. We all make mistakes. Some worse than others. But if you post your “Ls” on Twitter, it’s pretty much a given that you’re gonna get roasted to a crisp if you have more than a handful of followers. Twitter’s latest victim is Jonathan Kay, a writer for Quillette – an Australian publication that weirdly attracts both racists and liberals. But today we’re here to talk about what Jonathan Kay did wrong, physically instead of morally.

Kay took to Twitter yesterday to innocently reveal that he had been using an Arm & Hammer dog shampoo for the past few months. At first, we were like “okay, maybe it looked like a human shampoo.” But then we saw a photo of the pet grooming product and it has a very visible, very adorable dog on the packaging. And while Kay claims that “for pets” was in 4 point type. It’s…definitely not. Needless to say, Twitter users were very, very quick to rail on the dude with roasts and amusing parodies. While it’s true that his journalistic reputation didn’t do him any favors, it’s nice to see people roasting other people for doing something that is inane and fluffy. We just want to see a picture of how his hair looks now. Maybe using dog shampoo is the beauty hack we’ve been missing this whole time.