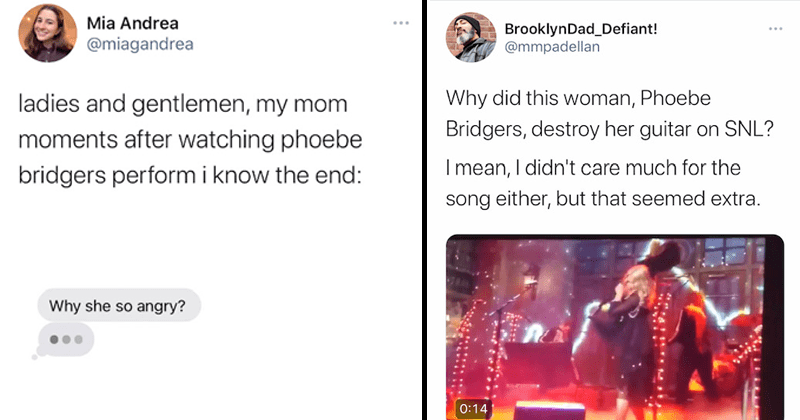 Saturday Night Live is a polarizing show. There are the people who think the sketch-comedy show been unwatchable for years, and then there are the people who watch it religiously because, well, routines or something? Last night, indie rocker Phoebe Bridgers was the musical guest, and it seems her performance united both camps, because it’s all that Twitter is talking about.

At the end of Bridgers’ final performance, the musician smashed (or attempted to smash, depending on who you ask) her guitar. Guitar smashing is a long-running and classic rock move, one that performers such as Jimi Hendrix, Kurt Cobain, and Pete Townsend were quite skilled at. But judging by some of the confused reactions on Twitter, people have forgotten the longstanding albeit destructive tradition. Some of the takes suggest widespread boredom – because people are equating the smashing to white privilege. Other takes are spent defending Bridgers’ actions. Phoebe herself had to explain that it was an inexpensive guitar, and she had obtained the blessing of its manufacturer. The best tweets, however, add some comedic flair to the weirdly controversial performance.