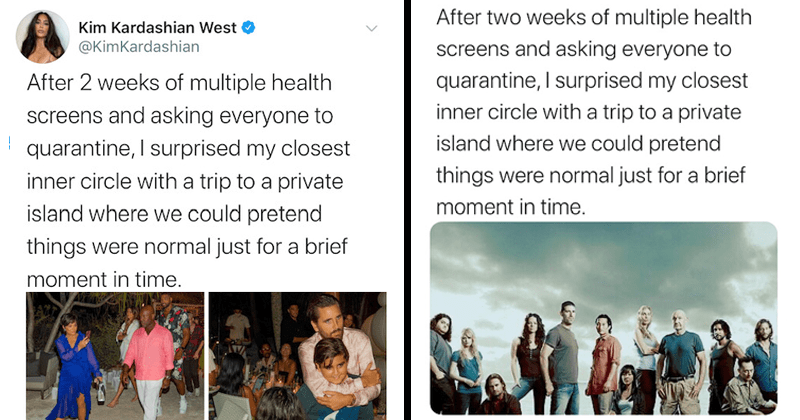 Kim Kardashian has done it again. In what can only be described as an excruciating un-humble brag, the reality star decided that now was the time to tell the internet about her lavish 40th birthday vacation on a private island.

After 2 weeks of multiple health screens and asking everyone to quarantine, I surprised my closest inner circle with a trip to a private island where we could pretend things were normal just for a brief moment in time. pic.twitter.com/cIFP7Nv5bV

This tweet is from an obnoxiously long thread in which Kardashian goes through pains to tell us all about her incredible trip. Surrounded by friends and family, Kim was able to indulge in activities like dancing, swimming near whales, movies on the beach, and probably some very expensive alcohol. The thread was punctuated with an incredibly tone-deaf disclaimer: “I realize that for most people, this is something that is so far out of reach right now, so in moments like these, I am humbly reminded of how privileged my life is.”

Judging by the response to the thread, her humble appeal to the poors has not made anyone feel better. The fact that Kardashian saw fit to flaunt her wealth during the middle of a pandemic – while people are dying – is something that most people can’t get past. While some people are calling Kardashian out in quote-tweets, others are employing a little more nuance. With memes. The “After 2 weeks and multiple health screens” tweet has become a popular copypasta, and industrious Twitter users are swapping out Kim’s photo for funnier (and scarier) images from pop culture. Using everything from Jeffrey Epstein’s island of sin to Jurassic Park, the memes are both scathing and excellent. Hopefully Kim will think twice before channeling Marie Antoinette in the future.